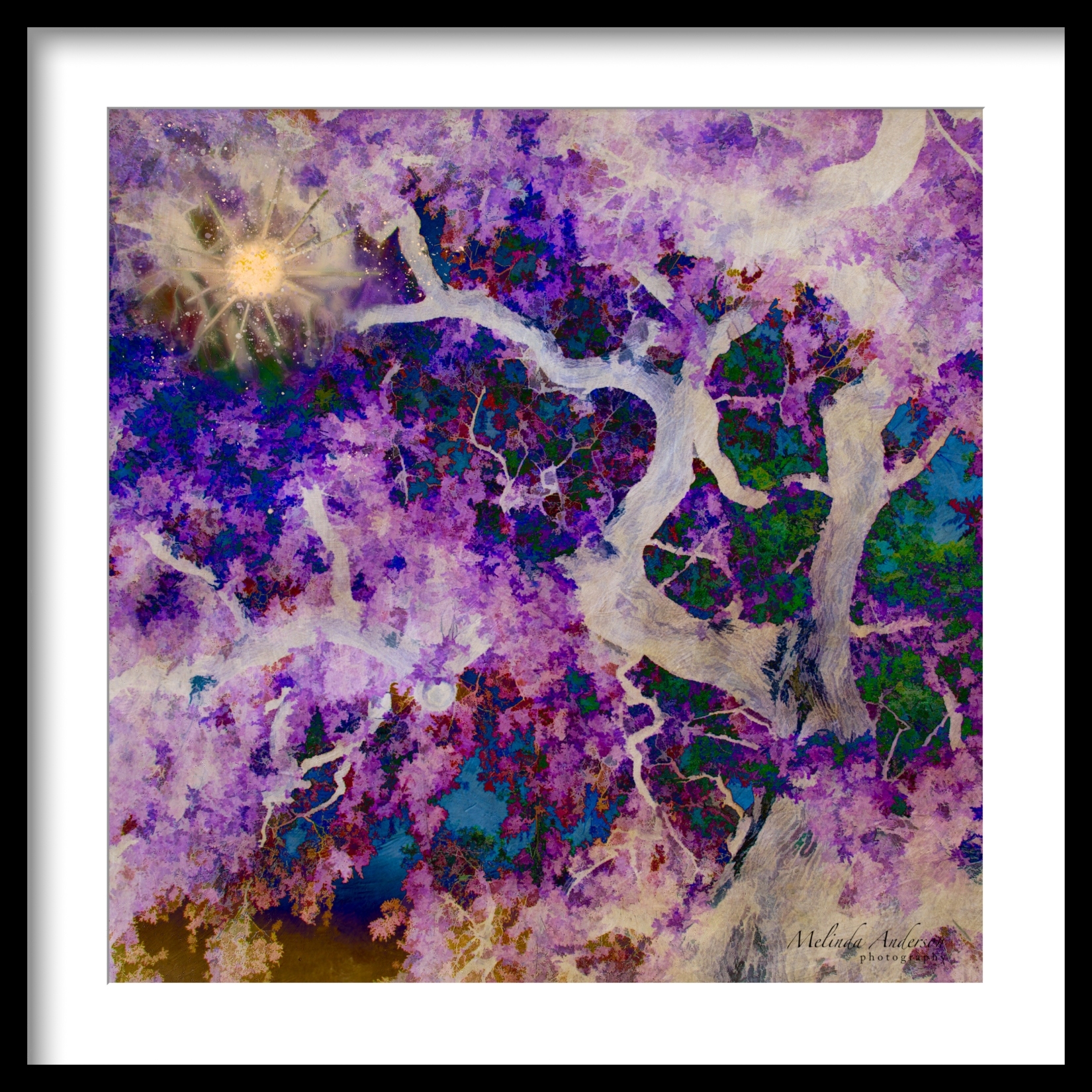 Another in my series for my Unity class

Here is the second in my Stations of the Cross series- Nativity. I started with a photo taken of the sun rising from our driveway. When I started working on my image, I noticed a single star in the sky, which I had not seen when I took the photo. I replaced it with the “Christmas Star” (the Jupiter-Saturn conjunction photographed last December). In this photo you can just barely see Jupiter and four of its moons and Saturn with its rings blurred.  And then, I of course did some creative editing! 🙂

I am taking an eight week class through my church where we all create art! There are painters, mixed media artists, musicians, and at least one photographer (!) coming together to have discussions based on assigned readings and then create art in response. Each week we share art with each other in our zoom meetings.

I had imagined this would be similar to contemplative photography, which I am familiar with, but it turned out to be based on Stations of the Cross, which is totally outside my experience. The class explores the metaphysical meanings of the stations as related to our own lives. This is way outside my comfort zone, but the excellent teacher and interesting classmates are making this a wonderful experience!

This is second in my rooflines series- rooflines of Bodie.

Those are the words that come to mind when I think of the west these days. October is always fire season, but in recent years ever more so. My home state of California has been on fire this last month, causing tens of thousands to evacuate and thousands of others to be without power. We have a massive drought going on here in Arizona as well- no monsoon season the last two years. Add in a pandemic, an election, and political upheavals- the world of 2020 is not the world we thought we were promised.

I’ve learned in recent years that the process of taking and editing photos soothes my worried soul. Below is a little piece of photo art I created this week. As always, a camera (or in this case an iPhone) and Photoshop ease my worries.

Maybe cows dislike social isolation as much as we do. Maybe they dream of their friends. Maybe.

Some Photoshop fun with a Gerbera Daisy . . .

Since I’ve lived here, I’ve had fun taking photos of Bill, the statue atop the Elks Theatre in town. A few weeks ago, we were walking on a street behind and uphill from the theatre when I spotted Bill. It was sunset, and the angle of my shot had Bill silhouetted atop Granite Mountain in the background- as if Bill was in the wild. I darkened the already dark foreground to eliminate the lines of the building- and then went wild with textures. Not my usual colors and style- but it does have part of a circle. Pandemic Photoshop Play. . .

Another trip to my photo archives- a fun edit of a barrel cactus. 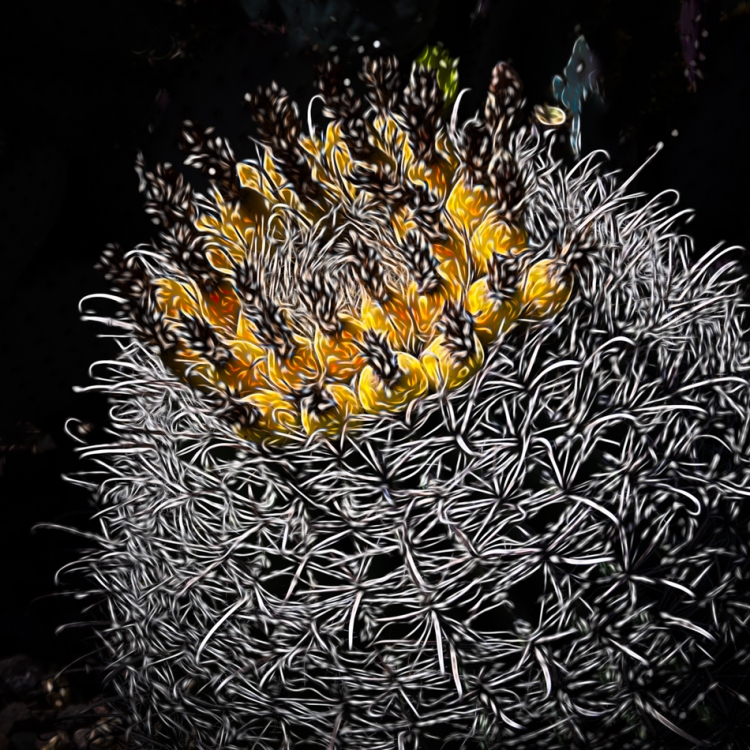 I had fun playing with an iPhone photo of a swan this week. It is actually a photo of a photo on my monitor – if that makes sense. I was texting a friend about the swan, so I snapped a photo of it from my screen. Then I played with it this week on my iPhone and ended up liking the result.

Here’s my photo for class this week. Somehow, it ended up as a pretend vintage postcard. An abstract view of the cinder cone at Sunset Crater.

On our visit to Flagstaff last week, we spent some time at the Arboretum. It was very enjoyable (even with the busload of second graders catching tadpoles at the pond), and we especially liked the view of the San Francisco Peaks from across the meadow. A frame is set up for picture taking, and of course we couldn’t resist taking photos of each other with the peaks behind. 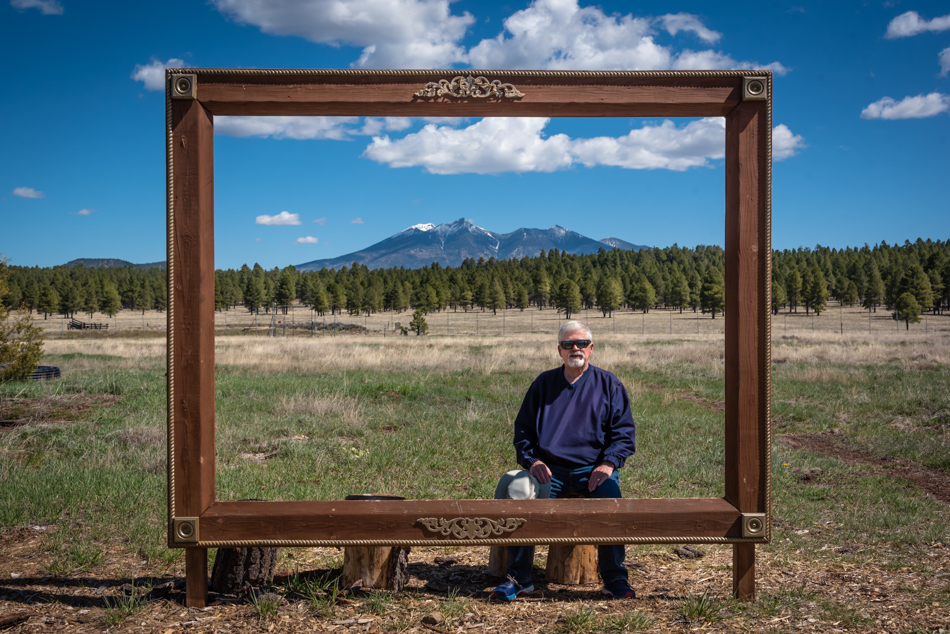 When I got home, I had some photoshop fun with this photo:

My weekly photo group starts next week, and at the end of the year we were given the topic “Excitable” as a topic for the first day of the semester. There was some debate over what that meant- exciting? Something that made the viewer excited? Someone or something that was excitable in the image?  Who knew?

When we were at the Petrified Forest in June, I kept remarking that the landscape looked like that of another planet, and I immediately got the idea of creating some sort of fantasy composite using some photos I had taken in a novelty shop in Jerome. I got partway finished and abandoned the project, hoping for that special shot that I would take over the summer. That special shot never materialized.

So here we are on Planet X-citable, which will likely be my first image of the year- unless that special shot materializes over the weekend. . .