One of the iconic Prescott views is of Granite Mountain. I captured this shot through the windshield on our way home.

The Snow in the Dells

The Granite Dells are a Prescott landmark- and how beautiful they look when capped with snow! 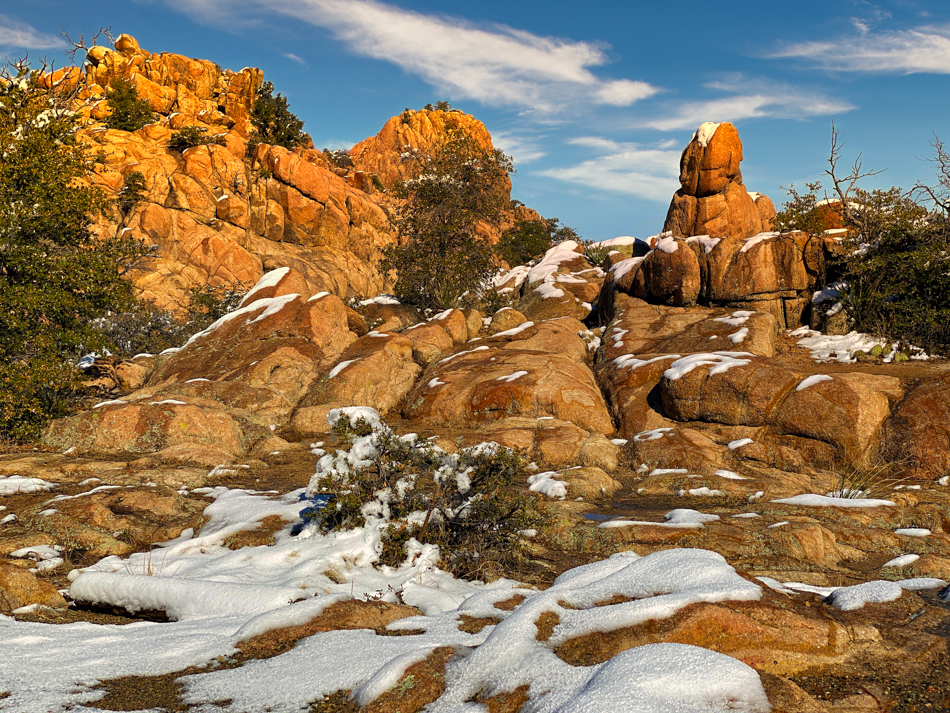 Yes, this was taken with my iPhone! It was edited on the phone with Snapseed with final touches in Luminar.

On Thanksgiving night, a huge storm blew in- and in the morning we woke up to this view from our front porch:

It continued to snow for most of the day, blanketing everything in 8-10 inches of the beautiful white stuff. It has been frustrating to not be steady enough on my feet yet to walk around with my camera in the snow- but on Saturday, we did take a drive around Prescott. I was able to capture some decent shots with my iPhone from the car or standing beside the car- and I’ll be posting those later.

Prescott is ENVELOPED in SNOW!  An unusually severe snowstorm hit Northern Arizona Wednesday night and continued throughout the next day. The snow is falling more lightly as of Thursday evening, but we do have approximately 16 inches (and huge drifts!) where we live. We were all prepared for it, but the reality is pretty awe inspiring! Schools closed and a State of Emergency has been declared (seriously!).   I think we’ll be happy campers here at home as long as the satellite dish continues to operate.

Fall has begun in Prescott! 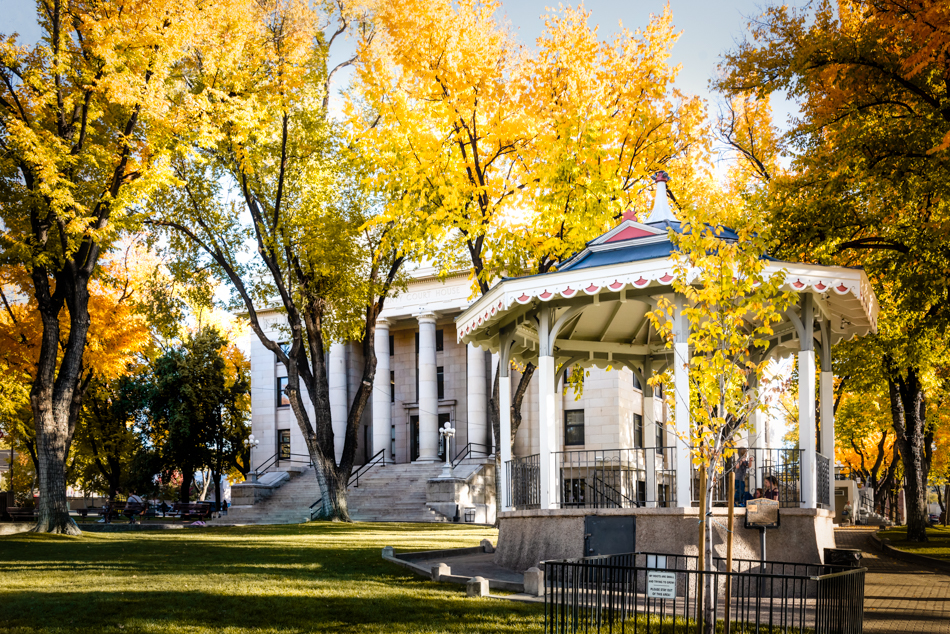 I hadn’t taken my traditional flag photo for today- so we went down this afternoon to Courthouse Square after the crowds had dispersed. Here’s a shot of the gazebo decorated in red, white, and blue.

July 4, 2018 | Categories: out and about | Tags: Arizona, photography, Prescott | Leave a comment

When we walked the paths at Willow Lake during our end of February snowstorm, we were amazed at how saturated the color of the rocks was in the diffused light and falling snow. Here is the view as we walked our usual path through the rocks toward the lake. Not quite Sedona- but still beautiful! 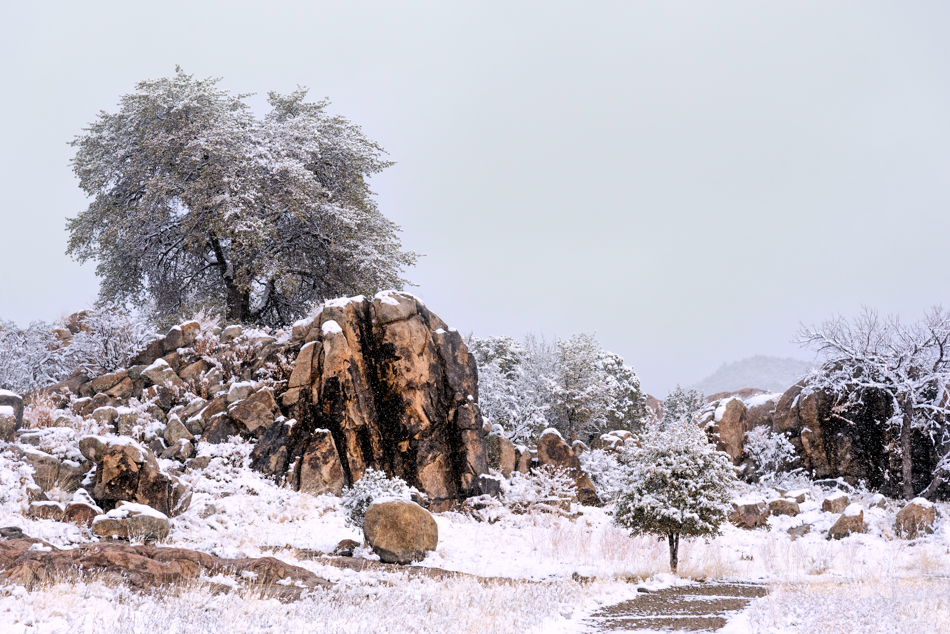 We had snow Tuesday night which gave us maybe an inch yesterday morning. I was out with my camera as soon as I got up, because I knew it wouldn’t last- and it didn’t. Here’s a view of the path leading from Watson Lake to Watson Woods, a pretty scene. 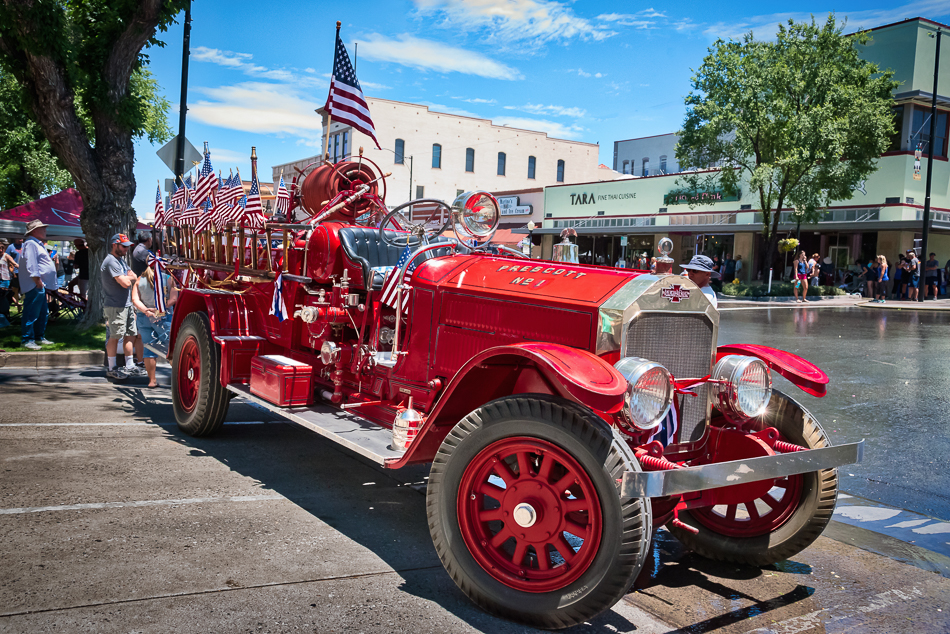 I love living in this small town1

The Goodwin fire has been burning since Saturday, I think- and is over 4400 acres, forcing the evacuation of the town of Mayer and other small communities southwest of Prescott. And no, it is not contained or controlled. If you look closely at the photo, you can see one of the planes that were flying over the fire this afternoon. With this area’s still vivid memories of the 2013 fire that took the lives of 19 hot shots, fire is taken very seriously here. Although we are in the monsoon season, no rain is in the forecast. 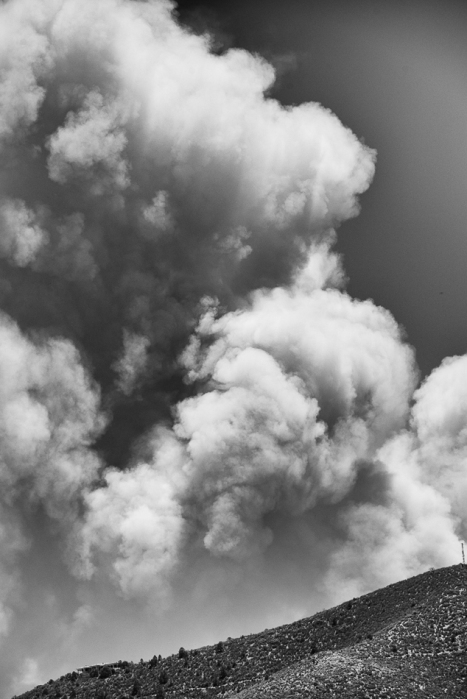 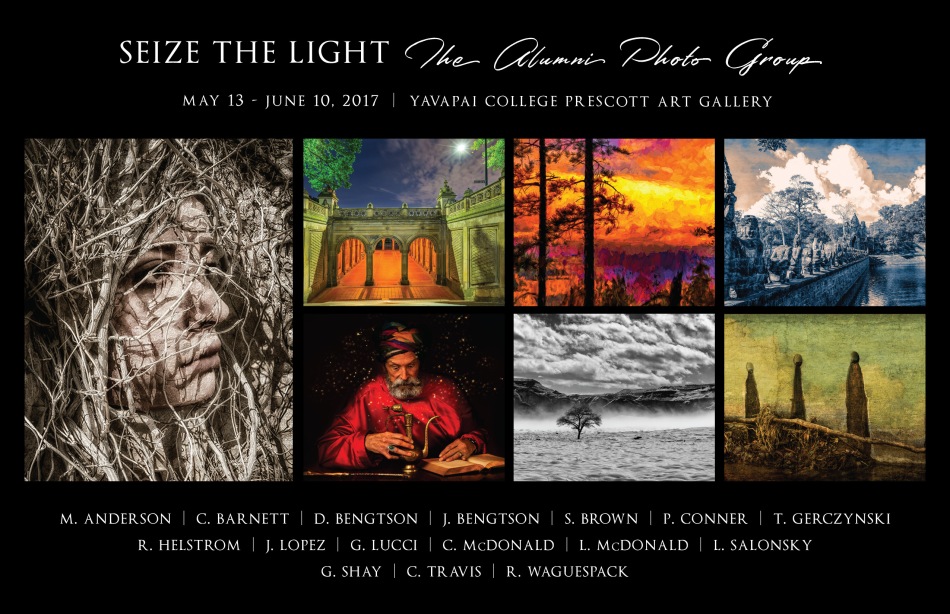 It is a beautiful show- and I am honored to be a part of it!

P.S. One of my photos has SOLD!

Bill’s Got the Blues

I never knew his name was Bill!

It was pointed out to me that the elk on top of our Elks’ Theatre is named Bill. This has something to do with a poster found in the old building that says Hello, Bill on it (an Elks tradition?).  While the theatre was in disrepair a few (10?) years ago, Bill was languishing in Prescott Valley waiting to return to his former glory. When found, he sadly had a dozen or more bullet holes, but now he has been repaired and returned his rightful spot on top of his theatre overlooking downtown. 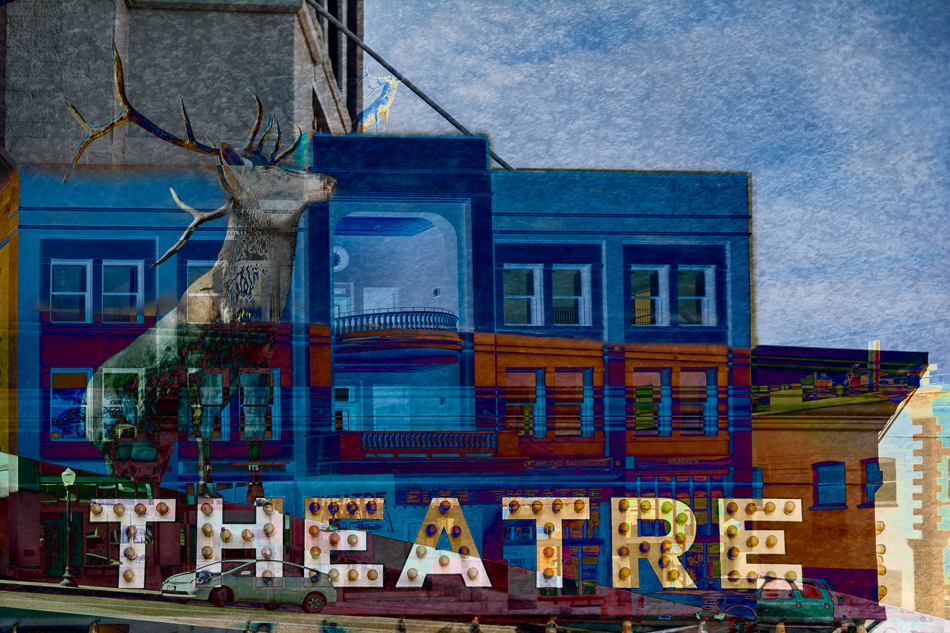 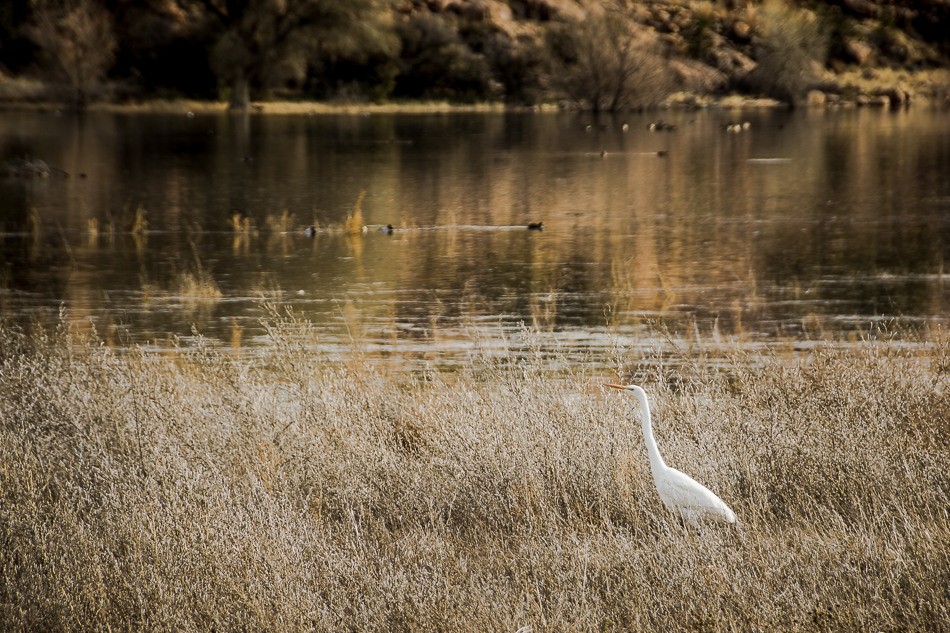 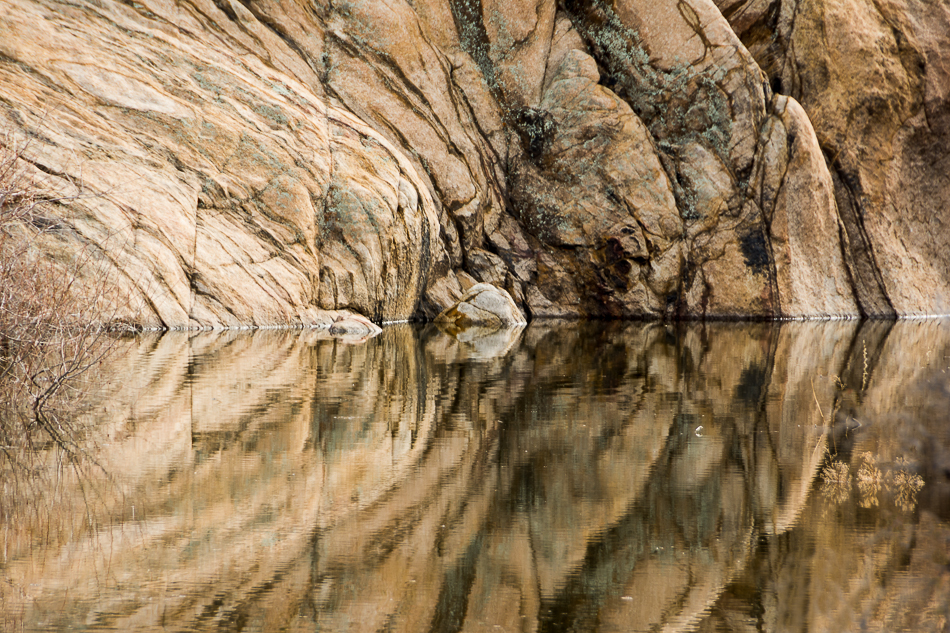 It was a beautiful sunny day in Prescott- perfect for a walk and some photography. The water is high at Willow Lake, and areas where we normally walk are under water. The upside is that the water surrounding the boulders create beautiful reflections- and waterfowl is everywhere! The usual ducks were there, as well as egrets- and there was a hawk perched high in a tree (too far for a photo with my limited lens). 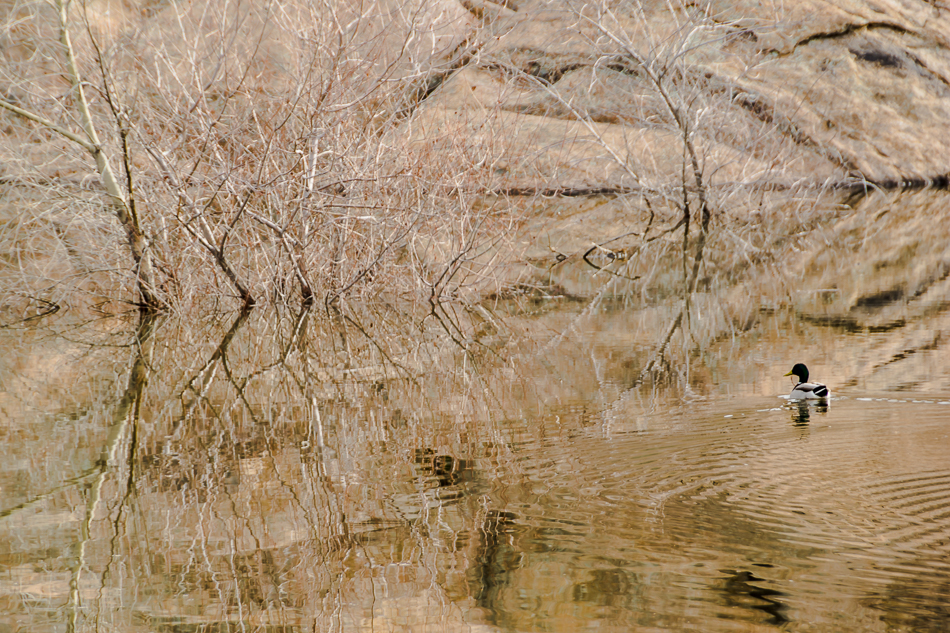 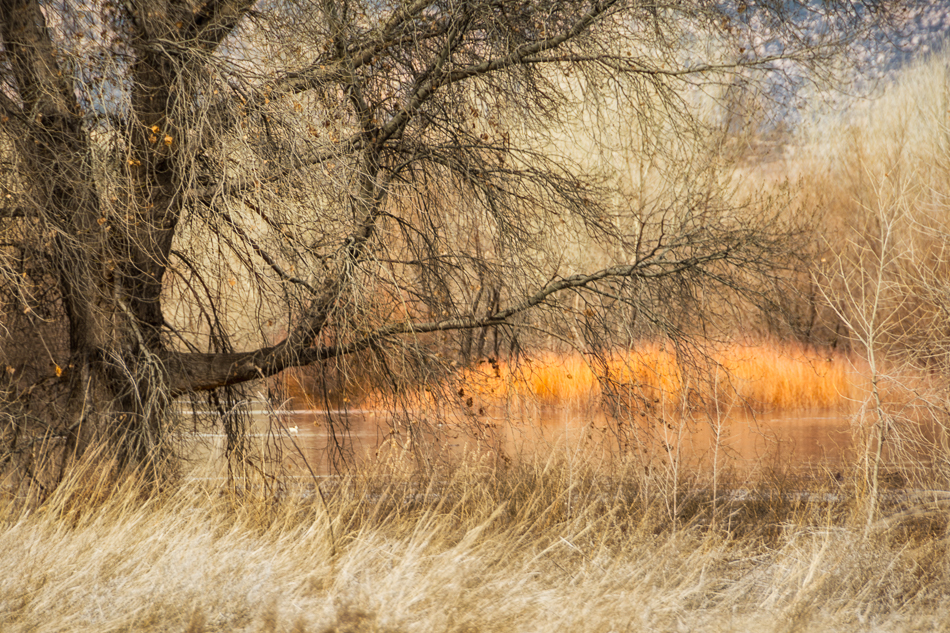