Last night we went out to grab a quick salad before settling down to rewatch one of our favorite Brit TV series- Scott and Bailey (we just can’t seem to get enough of these fascinating characters!). After dinner, the sky put on an amazing display for us, complete with God-beams highlighting Granite Mountain! I managed to capture several shots with my iPhone through the windshield as we drove towards home.

After we had been home for a bit, we heard the pitter patter of gentle rain, which had been predicted for earlier in the day. We ran outside and watched, and, unfortunately, the rain stopped after about ten minutes. The drought here is getting scary- our lakes are drying up and there are wildfires burning. In fact, it is likely that the some of the clouds and haze behind the mountains in this photo are actually smoke.

Each day is a new day. Happy Tuesday, everyone!

Time spent gazing at the night sky can be as calming as watching the rhythm of ocean waves. Last night I went outside for a half hour or so before the International Space Station was due to fly over and spent time looking at the moon as it appeared and disappeared behind fast moving clouds.

And then we watched the space station as it made its arc over our driveway- looking like a bright star zooming across the night sky. A few moments of excitement on that dark night.

I missed blackout Tuesday- I hadn’t realized it was happening until late yesterday. But I add my voice to those crying for justice for all Black Americans. These are dark times- but I have hope for better days ahead.

The light, the clouds, the sky! We had a crazy beautiful sunset last night!

It was the golden light that we noticed first. Lonnie was calling me to come out just as I was running around the house looking for my camera (I know, I know I should always keep it one place, but I had been on the phone with Matt and taking pumpkin photos at the same time- I can’t multi-task). When I found it, I ran (hobbled fast) outside and saw the CLOUDS! There was one of our magnificent red sunsets going on behind the house, but it was the golden clouds out front that took my breath away!

I don’t think I will be going anywhere at zero dark thirty to photograph the eclipse, so here is what I saw tonight. 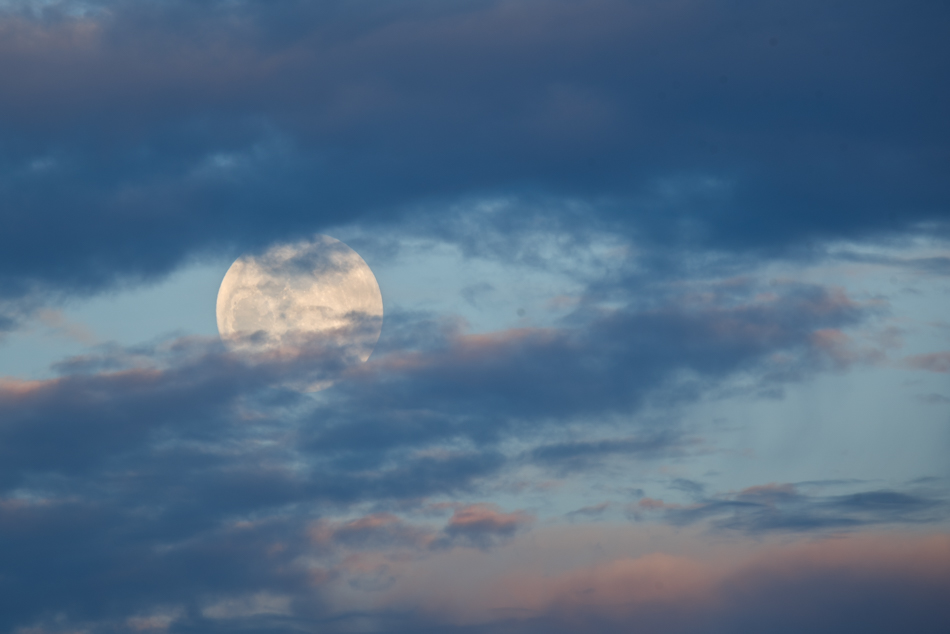 There were clouds on the horizon- plus it was still very light- so I couldn’t see the moon until it climbed just a bit into the sky.  As it got a little darker, I took the shots below: 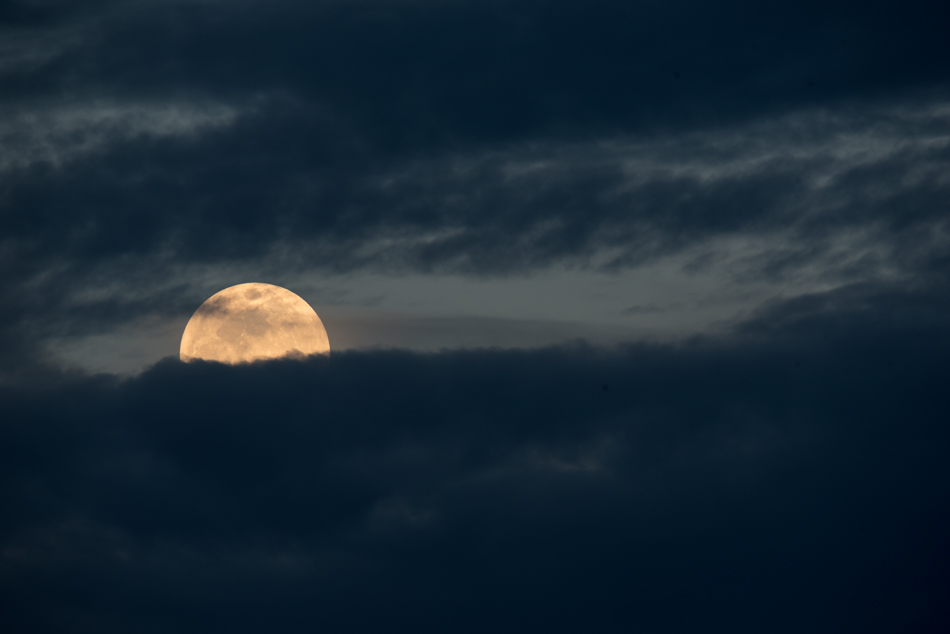 And as I post this, the moon is high in the sky- and beautiful as always!

Here is my current favorite cloud photo. I captured this one through the car window as we were driving to Moab; I think we were already in Utah by this point. It reminds me of a giant flying saucer hovering over the road. Can you tell I was a child in the 1950’s?

I must admit I haven’t used my camera since I came back from my last trip to Alaska. I first had a major (for me) attack of allergies, which kept me down and out for a couple weeks- and then last week I had an unexpected oral surgery (an infection in an old root canal). I am really looking forward to getting out again with my camera soon-ish!

In the meantime, I have declared it Cloud Week on my blog! I had never traveled much in the Southwest until we moved here- so I am still constantly amazed by the dramatic cloudscapes. Today’s shot from Moab is fairly tame-but I love the simplicity and colors in this early morning sky.

My friend, Carol, is visiting! After an afternoon at Barnstar Brewery and a delicious barbecue dinner, we all sat outside talking, laughing, and watching birds until after dark. As we got up to go inside, we were surprised to look up and see clouds which had not been visible earlier. Carol and I got our cameras to photograph the moon peeking out through the cloud cover and were surprised to see the colors that appeared in our images. Smoke from the fire? I don’t know. 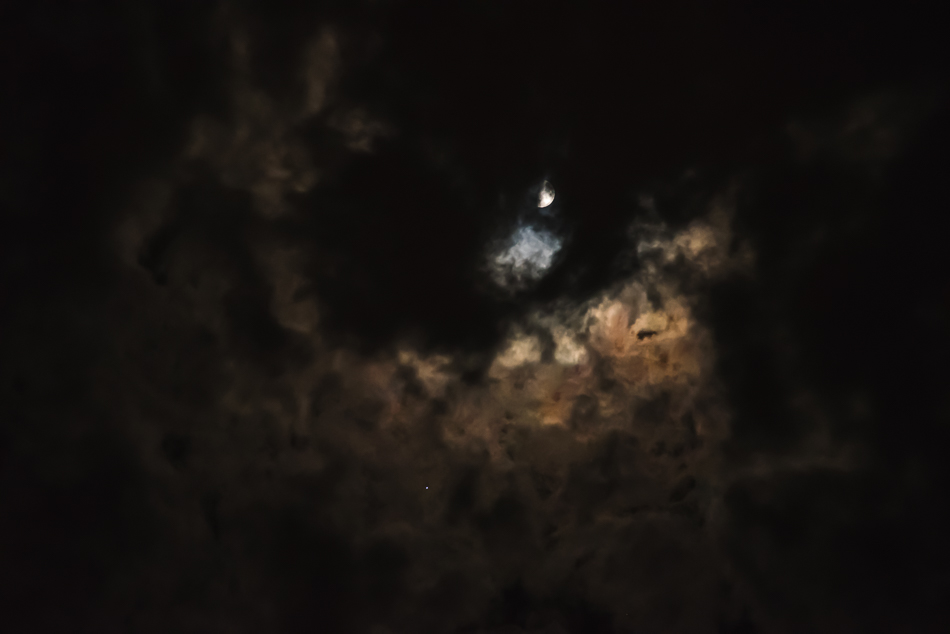 In this shot, you can see a star in the lower part of the photo.

A little impression of our sunset view last night- smoke and pink sky. Multiple exposure layered with a view of the moon from the other direction and an added texture. The fire continues to grow as I write this. We are far enough away to feel safe, but it is scary how fast it is growing.

As I walked out of our bedroom this morning, I could see a bright orange glow on the living room wall. I ran (yes, ran) to the window to see a gorgeous sunrise peeking out under a dark, cloudy sky. I knew it would only last a minute or two, so I ran around the house- where is my camera (on the kitchen counter!)?, grabbed it (with MACRO lens attached, no time to switch), fumbled with the lock on the font door, and raced to the driveway in my nightgown and slippers to get about 10 shots, before the orange glow faded. No photoshopping- just a little brightening of the snow. This is what it looked like:

I have photographed this view of the San Francisco Peaks many times- and recently have used both intentional camera movement and multiple exposure for a different look. But really- it is the skies that make the difference.

This shot is of last Friday’s sunrise and is a multiple exposure. It looks like a woven blanket to me.

And here is a more “traditional” photo taken at the same time- not that much different, except for the colors of the mountains. I love how the sun is hitting the snow at the top.

Sometimes you don’t have to wander far from home to find photo subjects. 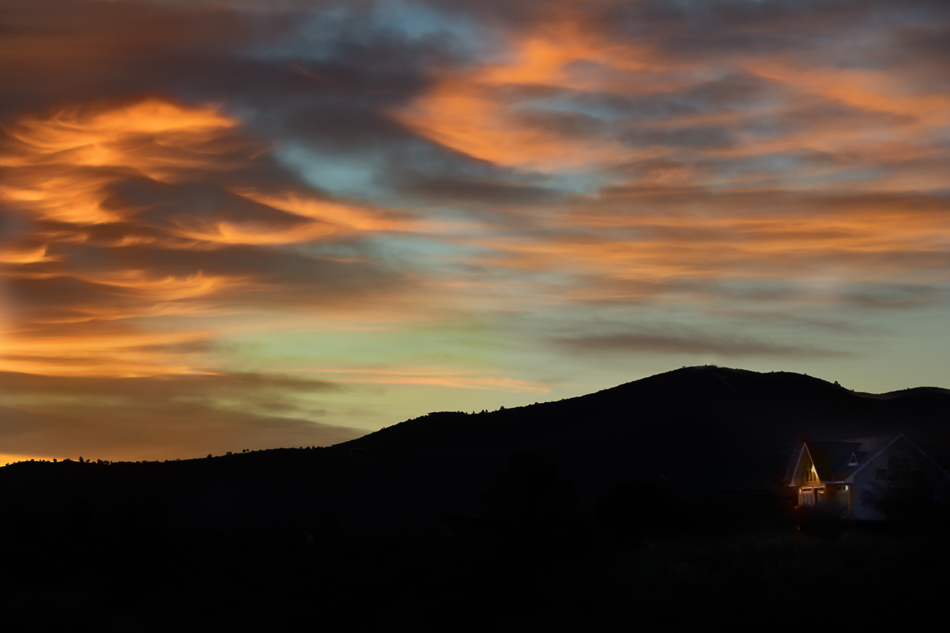 We are blessed with a view of beautiful Arizona sunrises, which I never get tired of photographing. Lonnie and I were both out there as the sky shifted from red and pink to orange and finally blue this morning.

The Sky Has Fallen

But the sun still comes up each day.

Tonight is the night for moon-gazing! 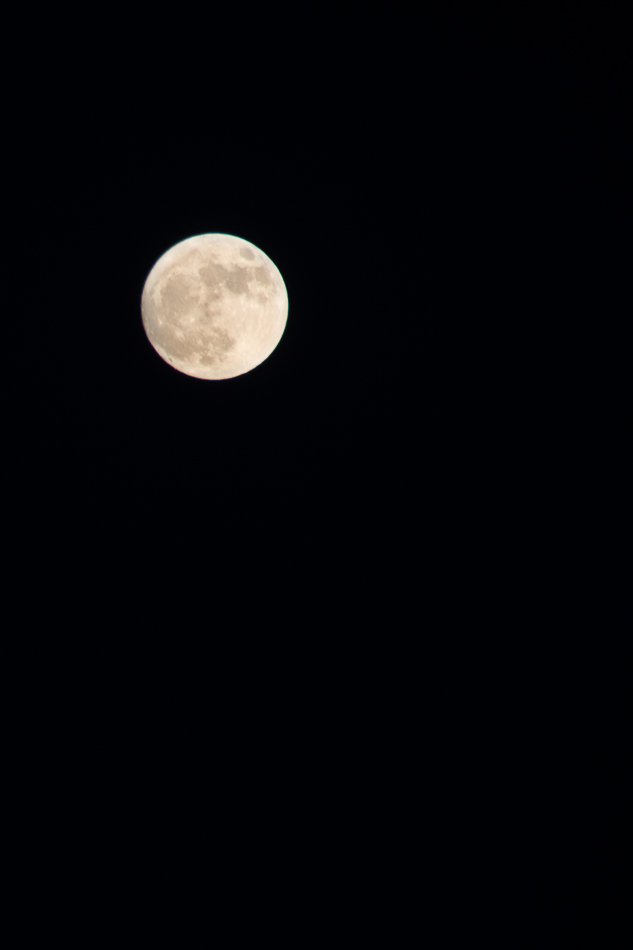 I didn’t have the time or energy to go anywhere special for a beautiful foreground- so these are our hills (blurred with intentional camera movement). 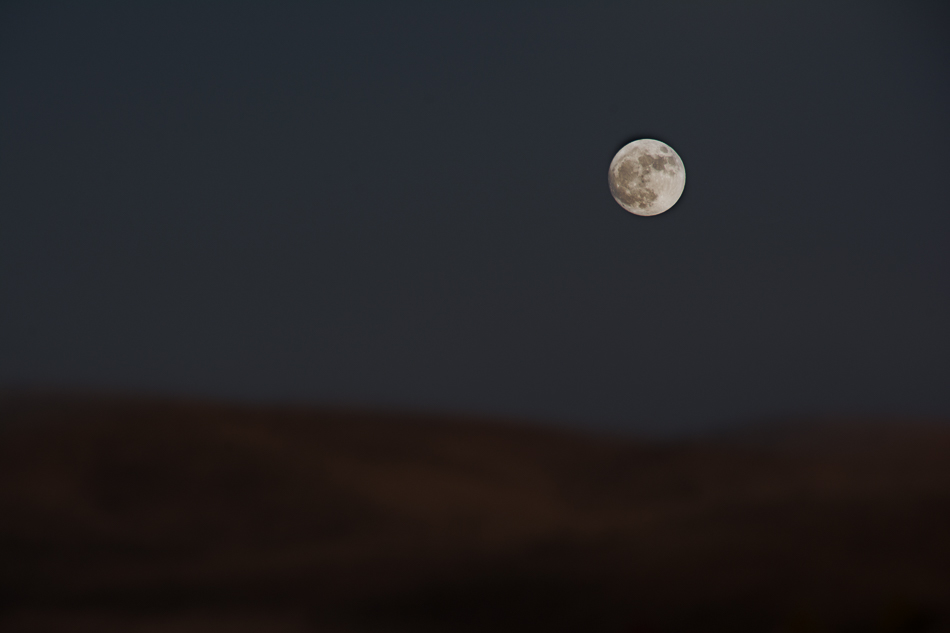 In January, a sign went up in the empty lot across the street from us, indicating a new home was going to be built. Soon, dirt and rocks were dumped along the sidewalk, a sure indication that grading was going to be taking place on the property. Eight and a half months later, no more work has been done.

We may not have new neighbors, but new life is appearing in those piles of dirt, thanks to the monsoon rains. Wildflowers have sprouted, their cheerful heads reaching toward the sky- in contrast to the images of sunflower decay I’ve been posting!