When we arrived at Watson Lake, a heron was sitting on the little float that sits in the middle of the lake. After awhile it flew in front of us and then across to the opposite shore. The wind was ruffling its feathers as it stood immobile until after we left.

I thought I could see swans from the road last week, so we went over to Willow Lake late Saturday afternoon to see what we could see. No swans were in the area where we had seen them before, but a heron was slowly wading through the shallows stalking his prey. We watched for a half hour or so- but never saw him catch anything. As the light was fading, we walked back to the car, leaving him still searching for dinner. 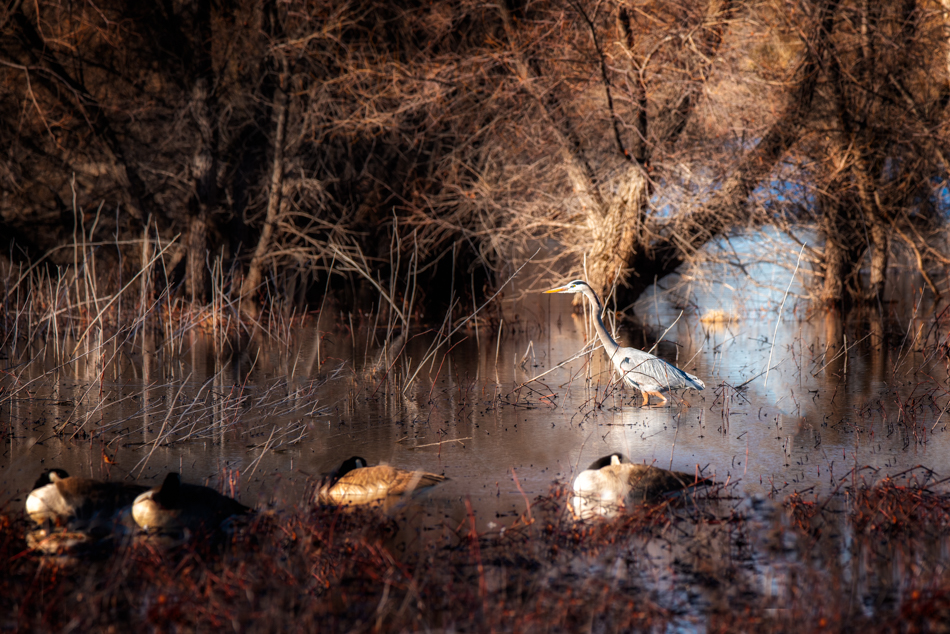 There is nothing more peaceful than watching herons at a lake. . .

Last week in my photo class I overheard someone mentioning a path by the rookery- and I interjected, “What rookery? Where?” It turns out that deep in a grove of cottonwoods at Willow Lake there are huge old trees containing enormous heron, egret, and cormorant nests. Although I am sadly lacking in bird knowledge, I love to take photos of them- and the idea of a rookery close by was impossible to resist. A few days later, Lonnie and I found the right path at the lake- and we were there! 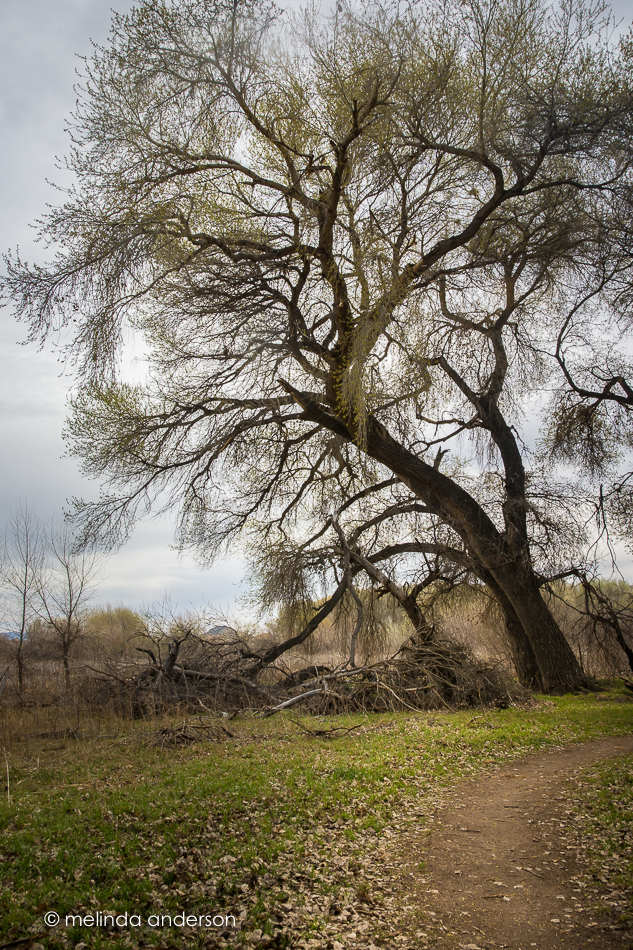 As we entered the area, we could hear wingbeats and gutteral squawks overhead before we even saw the nests- which are impossible to miss. I don’t think I managed to convey the enormity of the nests in the photo below, but you can get an idea of how numerous and high up they were.

In the first tree, there were 10 or 12 herons perched on nests or branches and occasionally flying around.  The next tree was packed with cormorants actively nest-building. We didn’t see egrets, although we heard they were around. It was an amazing sight!

I think this is the first time I’ve ever photographed herons from below- probably not a wise place to be. 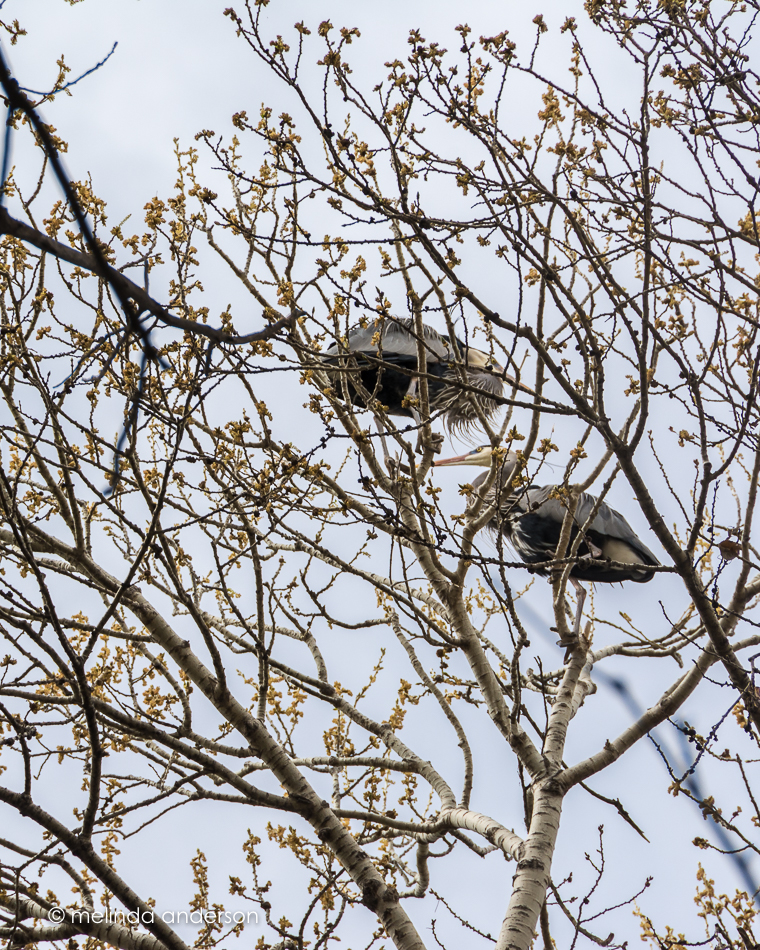 On our way home from downtown on last week’s snowy day, we stopped at Watson Lake to see if the Dells were covered with snow.  The sun had just started to peek through the clouds, and there was only a slight dusting of snow visible.  I watched from up above as the heron waded along the shoreline- a peaceful sight. 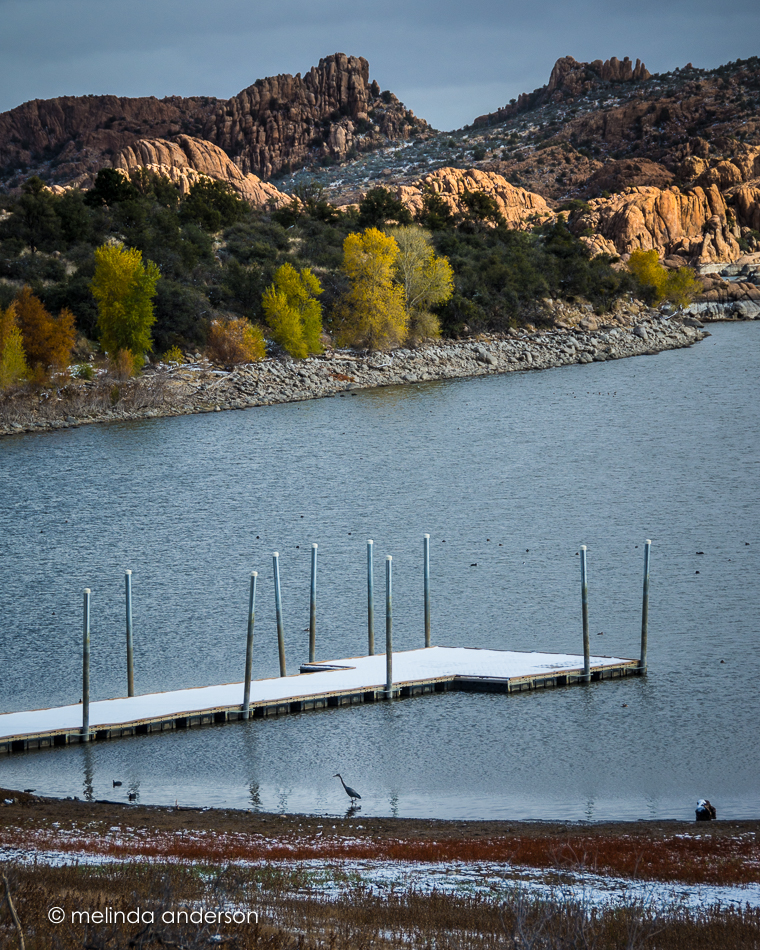