This post isn’t exactly photography related, but it’s about something that has been very much on my mind and heart in the last couple months.

Since childhood, I have been fascinated by family stories and relationships- how do we all connect? I wrote out family trees while still a child, although they only went back to my great-grandparents- and weren’t entirely accurate.  I think some of this fascination had to do with being an only child; I wanted more PEOPLE!

Well, I have them now! We are still a small family, but our family tree includes 6,057 people at last count. 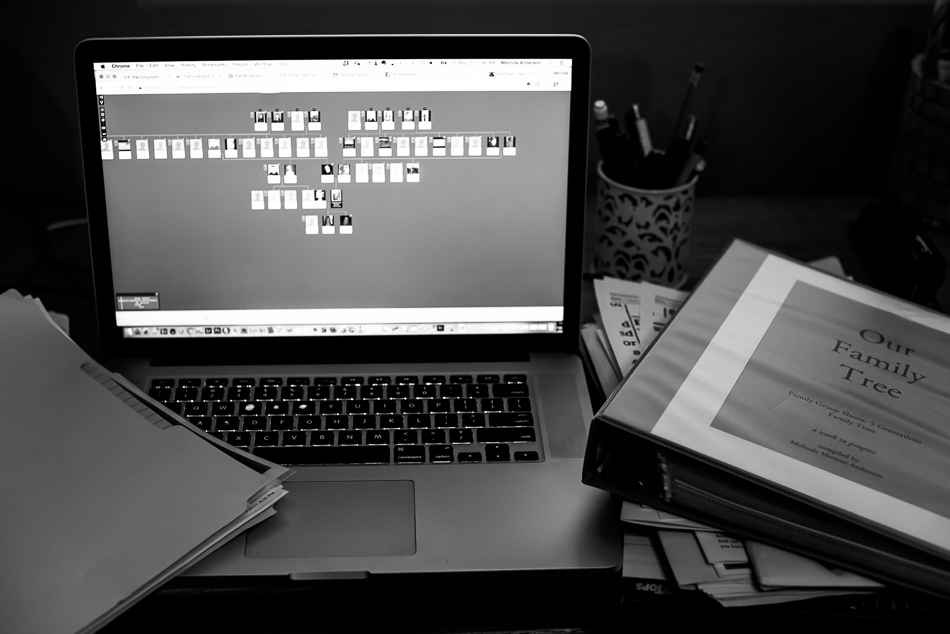 In the last year, I’ve developed an interest in DNA as a genealogical tool, but, truthfully, it was hard to wrap my mind around triangulations, chromosomes, centimorgans and segments. Still is! However, some unexpected DNA cousin matches in the last couple months have motivated me to learn to apply science to my lifelong hobby.  You see, when you have your DNA done, you not only learn your ethnicity, but you see how other people who have taken the test are related to you. People can be totally private, but their user names still pop up as matches and their relationship to you is estimated by the number of centimorgans you have in common. There were some surnames in four close cousin matches that were totally unfamiliar to me- and they had trees!

Without divulging names and where they fit on our tree, I will say that at least 3 of the 4 were adopted- and one has not written back.  And they were from the same general geographical area.  A mystery- and I love mysteries!

The more I went through their sketchy, incomplete trees and those of dozens of others that connected to them, the more I realized we had an NPE- a Non-Paternal Event, which means that the father of record is not the biological father. This was not a huge surprise, because there was a known ancestor who we had heard was not the actual father. About ten years ago, I decided to incorporate the father of record into our tree and had traced his ancestors back to colonial days. Now it looks like there will be a whole new line to investigate.

The adoptees that I wrote to knew the names of their birth parents, but not their ancestors- except for one. And I’ve found how she connects to the others- most likely through her unknown father’s line. This is the fun part. The hard part for me is seeing the broken families in the trees and imagining the hardships some of these people were facing.

The evidence is not solid yet on how these adopted cousins fit into our tree; I can connect them more easily to each other than to us- except through DNA. And the conventional wisdom is that DNA doesn’t lie- people do. Yikes.

I’m sure this post is hard to follow without more specific details, but I’m trying to respect the privacy of family members. I have mixed feelings about the whole situation- it is so wonderful how DNA can bring people together, but it also can reveal secrets that the people involved may never have wanted to be revealed. There are ethical dilemmas involved.

And then there is another DNA family story that will have a happy ending- just not yet.  Almost fifteen years ago, a twenty-some year old second cousin of Lonnie’s named Kenny (whom he had never met) contacted us wanting to share family history. He has the mind and dedication of a cold-case detective and is highly skilled at tracing family from past to present, as well as present to past (and all on his PHONE!). While other genealogy contacts have come and gone (or died. . .), I’ve been talking to Kenny (and, in recent years, texting with him) regularly all these years. And. . . DNA just showed us that he and Lonnie are not related. This has been very upsetting to say the least, but, since we know family is not all about DNA, he is and will always be our cousin.

So, as you may surmise, despite being very busy getting ready for two photography shows and leading an otherwise busy life as well- I have been obsessed with family history- and not getting much sleep. I keep putting my files aside, but then just can’t seem to step away from the computer!

So that’s what I’ve been doing!