Off the Beaten Path

I decided on this restaurant for lunch even before we arrived in Alaska. It is in Hope, less than a half hour off the Seward highway, and it gets rave reviews for its food and atmosphere on Trip Advisor and in our guidebook.  Our daughter tried to discourage us, saying it was a long drive through nothing very interesting and that the food and atmosphere was nothing special. But having no other lunch destination in mind on the way to Seward, we decided to go anyway.  I was really excited to finally arrive- but then we discovered it was CLOSED for a wedding. And we were starving! Part of the reason for going there was for me to take photos (Lonnie was more interested in the food, as it was way past lunchtime)- so I snapped away for 10 minutes before heading back to the main highway and on to Seward. 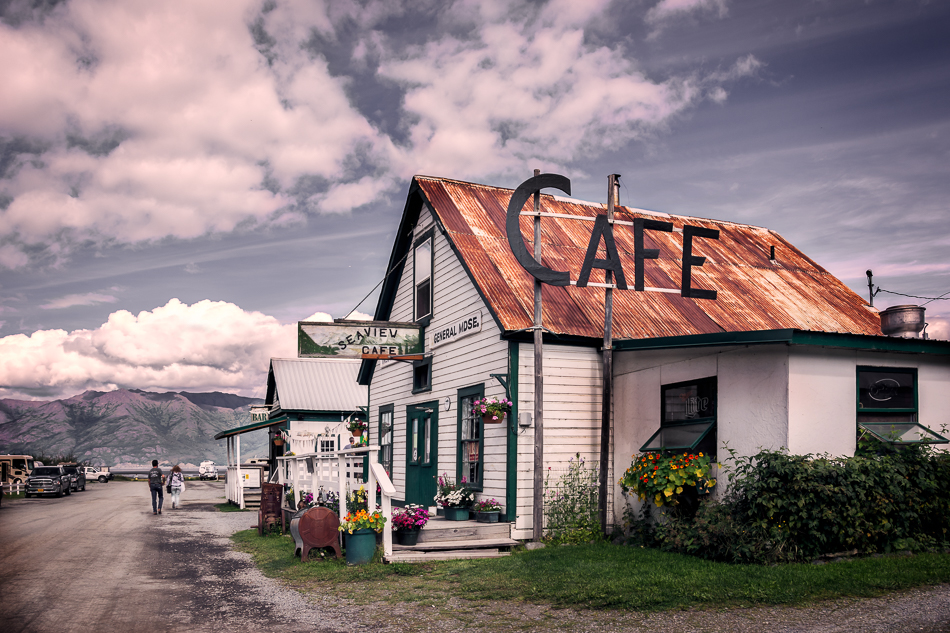 I actually spent a lot of time editing this photo, attempting to create sort of a Bleach Bypass look. The most time-consuming part of the edit was moving the couple closer to the foreground so they became part of the scene, instead of specks in the background.

The below image is a vertical crop of the above photo.  I took a vertical shot, but it wasn’t usable because of how much I had to crop off due to lens distortion with my 18-200 lens. Fortunately I had this version to play with.  After cropping and correcting the distortion (I love the new Transform Tool in Lightroom!), I used a preset in On1 Effects, which I modified a bit- and was done in five minutes.

This entry was posted on August 21, 2016 by Melinda. It was filed under travel and was tagged with Alaska, cafe, Hope, photography, sign.